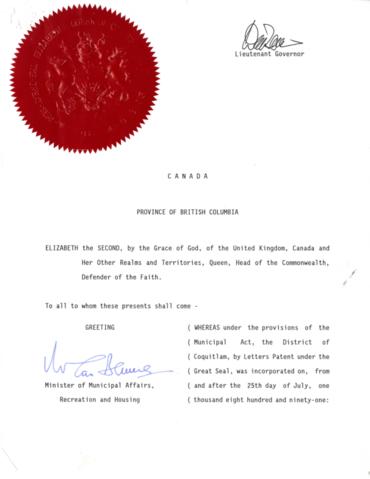 The Lieutenant Governor in British Columbia was established July 20, 1871.

Constitutional
Upholds the constitutional framework in British Columbia. In this role the Lieutenant Governor personifies the Crown, which is both the apex and the unifying link in the constitutional and political structure of the province – executive, legislative, and judicial.
Ensures the continued existence of government in the Province of British Columbia;
Selects a First Minister as Premier of the Province;
Appoints and administers the Oaths of Office, Allegiance and Confidentiality to the Premier and members of the Executive Council;
Summons, prorogues and dissolves the Legislature;
Delivers the Speech from the Throne;
Provides Royal Assent to provincial legislation;
Signs orders-in-council, proclamations and other official documents before they have the force of law;
Presents Bills by Message into the Legislature when they involve taxation or expenditure of public money.

Celebratory
Celebrates, inspires and connects British Columbians, while promoting the history, culture and achievements of the province.
Recognizes distinguished British Columbians by presenting orders, decorations and medals, including prestigious award programs that carry the name of the Lieutenant Governor
Provides personal patronage to support and encourage worthy endeavours focused on public service, philanthropy, the arts and community volunteerism
Hosts and attends celebrations and social events to connect British Columbians
Showcases the heritage, art and culture of the province while hosting members of the Royal Family, heads of state, ambassadors, consuls general and other distinguished visitors

The item consists of a digitized copy of the original 1992 Letters Patent that changed the status of the District of Coquitlam to the City of Coquitlam.