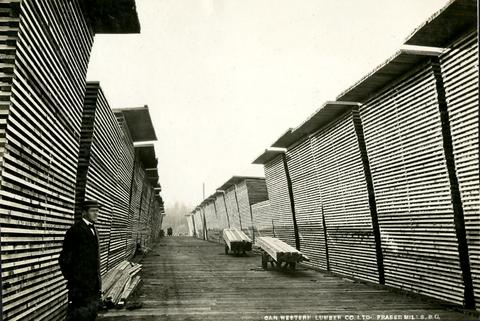 Leonard Frank was a well-known professional photographer in British Columbia between 1910-1944. He was born in Germany and first moved to San Francisco, before travelling to Alberni, B.C., to work in the mining industry. He began his photography interest there. In 1916, he moved to Vancouver and began to work as a photographer.

Son of one of Germany's earliest professional photographers, Leonard Frank was born in Berne, Germany in 1870. In 1892 he was struck with gold fever and emigrated to San Francisco, moving to Alberni on Vancouver Island two years later intending to prospect for gold. Frank never discovered gold, but by chance won a raffle prize of a camera which sparked his lifelong passion. While managing a general store and continuing to prospect, Frank took pictures of the surrounding country until photography became his chosen profession.

In 1917, Frank moved to Vancouver and quickly became the leading commercial / industrial photographer in the city. Frank 's photographs form a unique document of Vancouver and British Columbia's history between the wars. Whether in woods, shooting the activities of the lumber industry, or on Vancouver's waterfront, recording the contents of warehouses, Frank invariably managed to produce photographs which not only included the required factual information, but also the most exquisite natural light effects. He was frequently commissioned to photograph for both the provincial and federal governments, as well as being the official photographer for the Vancouver Board of Trade. Frank was an associate member of the Royal Photographic Society of Great Britain, the first in Vancouver to receive the coveted award. He later established Leonard Frank Photos studio. After Frank's death, his photographic studio was purchased by Otto Landauer, and closed in 1983.

Donated to the Coquitlam Heritage Society by: Antonio Pare