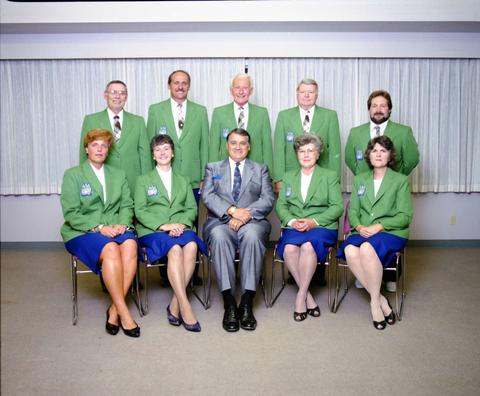 Russell Hellard was born in 1924 in Toronto, Ontario. He worked briefly as a laboratory assistant at the Ontario Research Foundation before enlisting with the Canadian Army in 1943. He trained at Camp Ipperwash in Ontario, then was sent for a Special Wireless Course at Vimy Barracks (the Royal Canadian Corps of Signals and Canadian Signal Training Centre), before being sent to Vancouver and then on to Victoria, British Columbia to await deployment to Australia. He served with the No.1 Special Wireless Group in Darwin monitoring Japanese wireless signals until the conclusion of the war in 1945. Once the war was over, it took six months to travel back to Canada with all of the equipment that had been shipped to Australia during the war. Mr. Hellard's unit returned to Canada in February, 1946.

Russell Hellard, his wife Kay and daughter Susan lived in Toronto before his company, Calgon, relocated him briefly to Edmonton for two years. The family then moved to Coquitlam in 1959. Hellard worked for 30 years in industrial water treatment and retired in 1981. During his retirement he became very active across British Columbia as a professional dog show photographer. He was very active in the area of crime prevention within the Coquitlam community between 1984 and 1997, serving as chairman of the Crime Prevention Committee from 1989-1991 and the Community Policing Committee from 1992-1996. He was also actively involved with the Crime Watch Patrol, Block Watch, Court Watch, and Vandal Watch programs. He volunteered his photographic skills for several large community events in Coquitlam, including the BC Summer Games and Centennial celebrations, both in 1991. Hellard has also been an active volunteer and activity group leader at Dogwood Pavilion with the Lifewriters Group, which began in 1999, the Veterans Group, and the Volunteer Improvement Program. He has also photographed many Dogwood Pavilion events over the years.

Under copyright. Provided for research purposes only. Other use requires permission.