The fonds consists of records made or received in the course of conducting the operational business of the City of Coquitlam and its various departments.

The fonds consists of an album containing photographs of a visit from a sister city delegation of the Tochigi Prefecture in Japan that took place in August, 1996. 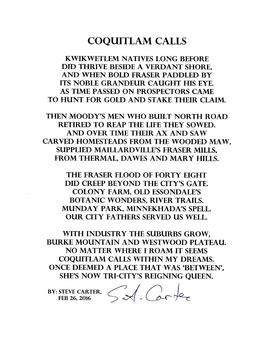 The item consists of a copy of Stephen A. Carter's poem, "Coquitlam Calls."