The fonds consists of records from the first graduation ceremony at Centennial School in 1967 as well as assorted certificates for academic achievement. The fonds also contains a photograph of the centennial totem pole as it was being painted in 1...

The Corporation of the District of Fraser Mills fonds

The fonds consists of bound copies of the Tri-Cities Now (Coquitlam Now) newspaper from 1984 to 2015 (note 1986 is missing); prints of photographs from 1991; copies of the newspaper on microfiche for various years; photographs and contents of the ... 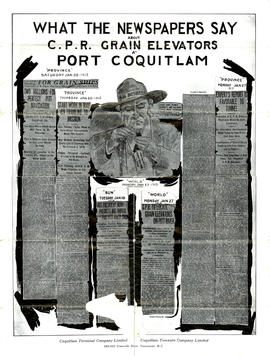 The item consists of a poster advertising development in what is now Port Coquitlam. The poster was produced by the Coquitlam Terminal Company Limited/Coquitlam Townsite Company Limited of 549-553 Granville St, Vancouver BC. The title of the poste...